Tweet
Oostvaardersplassen as a Tourist Attraction and the film "The New Wilderness"
The site Official Guide for visiting Holland says the following about the Oostvaardersplassen as a tourist attraction:  "The Oostvaardersplassen is an outstanding bird area. From Oostvaardersdijk and Knardijk you can study the Eurasian spoonbill, sea eagle, cormorant, egret, acrocephalus, black stork and many other bird species. The dikes are also called "bird boulevards".
Foxes, deer, hares, bats, and countless insects found the nature reserve on their own. Staatsbosbeheer, a governmental agency that manages the nature reserves of the Netherlands, has decided to give nature a hand and set Heck cattle, Konik horses and red deer out to graze freely.
Much of the nature reserve is closed to the public, so that nature can take its course in an undisturbed manner. Still, in the part that is accessible to all, you can admire all the flora and fauna, including primary forest, reed beds, ponds and large herbivores."
But is this all true? Many bird species like the spoonbill, robin,  grebe, teal, shoveler duck, hawk, kestrel, quail, pheasant, porcelain fowl, water and woodcock, barn swallow,  nightingale, meadow pipit, tree pipit and tree falcon have decreased in numbers or have already totally disappeared/do not return. Hares have also decreased in numbers. So is this little paradise on earth really an "outstanding bird area" and who do you/can you believe? And are the official figures and facts on the site of Staatsbosbeheer (SBB) who manages the reserve, really honest and realistic about the current situation?
TripAdviser
After recent events (March 2018) the site  TripAdviser has been overwhelmed by negative reports by a lot of people. In the message that appeared on twitter recently it even seems that reviews have been rejected.

Censoring by Dutch government? My critical review on #tripadvisor on the #Oostvaardersplassen has been removed, just like the critical reviewes of other visitors, and have been replaced by #FakeNews propaganda. SOCIAL MEDIA FRIENDS help to retweet the truth! pic.twitter.com/mqeVzh64BH

When looking at the  TripAdviser site we discovered that they published the following note :
Message from TripAdvisor: Due to a recent event that has attracted media attention and has caused an influx of review submissions that do not describe a first-hand experience, we have temporarily suspended publishing new reviews for this listing. If you’ve had a firsthand experience at this property, please check back soon - we’re looking forward to receiving your review! 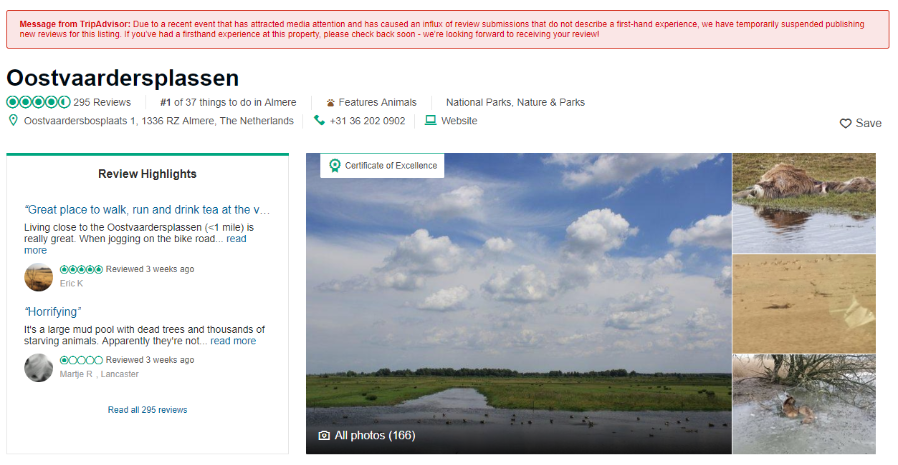 The hidden reality behind the film "The New Wildernis"
(we put a link to the film in Dutch below, so you can see it for yourself)
This is a translation of an article written by guest blog photographer/publicist Martijn de Jonge that appeared on climategate.nl
(attention!! before you start reading there are shocking images below)
"Last weekend (2015), the Oostvaardersplassen hagiography, the New Wilderness, received another great prize (Gouden Kalf). Rightly so, because Ruben Smit and his team expertly delivered a beautiful Staatsbosbeheer promotional film. Especially the big city man seems to fall massively for pathetic foals, poor deer and mating kingfishers in Holland's only real wilderness. Whoever tries to look behind the scenes encounters a completely different reality: the Oostvaardersplassen are hermetically sealed. Only when under the guidance of someone from the forest management department (SBB)  can a small part be visited outside the winter season. So what really happens can not be checked and you'll never know. People who try to do this are officially declared, 'Persona non Grata', sued and registered. That does not actually provide an incentive to find out the truth.
Nevertheless, with a lot of research and effort, there is a lot to be discovered. For example there are no kingfishers in the Oostvaardersplassen. Ruben Smit built different breeding walls but in the end could only make images outside the area of the OVP. In the winter of 2012-2013 he made a desperate call to the kingfisher working group to report beautiful kingfisher film locations because he did not manage to film them in the Oostvaardersplassen. The images that were shot are beautiful but do not come from this area. And that also applies to the beaver shots that were shot behind Almere in the De Vaart industrial area. Previously, in the New Wilderness Trailer, the sea eagle images shown were from Poland. Of course business-as-usual in the field of nature film making, but remarkable if you specifically profile the nature values ​​of the Oostvaardersplassen to  the public.

Photo: a Konik horse with her foal half born: was not in the New Wilderness film
But the large grazers are of course the main visual part of the film, despite the fact that these are mainly domestic cattle, once conceived and bred by the Germans. Commentator Harry Piekema almost cries when he tells how a herd of Konik horses deals with the death of a foal. "The herd mourns," he says with a creepy voice while some horses stand with their ass in the wind. In Bionieuws Smit indicated passionately that dying is part of the food cycle: "The slow death of red deer or konik horses is a raw but also a peaceful process". In the Oostvaardersplassen, more than 2,000 large grazers died in the winter of 2012-2013, of which about 1,700 were killed by the bullet. Whether or not that is a peaceful process we can not judge, given the closed nature of the area, but if you read the official reports you will get a good impression. For example, on 13 April 2012, 14 drowned konik horses were found that had sunk through the ice. At the beginning of March 2012, the forest managers found 11 konik horses starved on an isolated island, they were shot one after the other. Although the New Wilderness film team stayed in the area almost every day, it apparently escaped these scenes. This described process was undoubtedly a 'raw' but by human standards certainly not a 'peaceful' process. 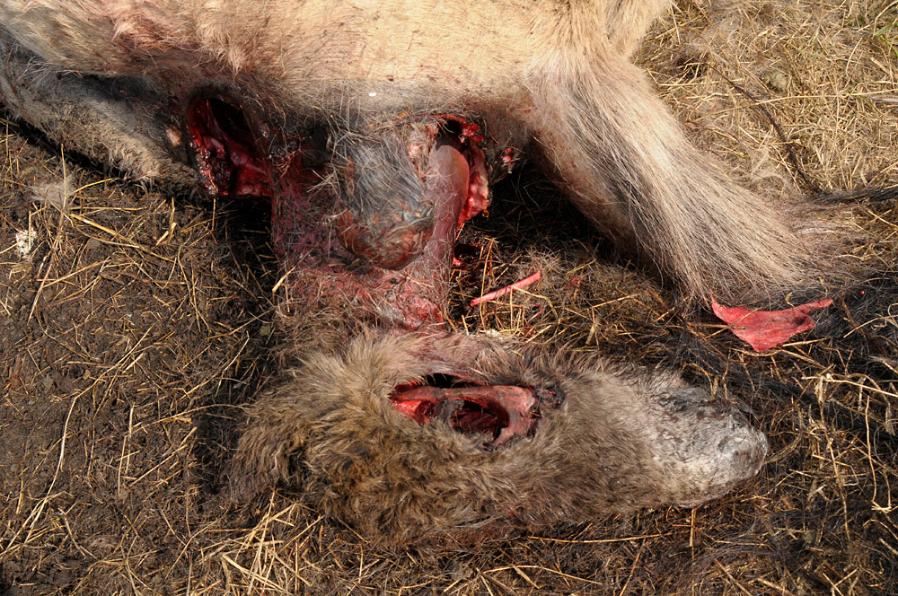 Photo: a foal sticks out of its mother
A few years ago we were in a Polish reserve where konik horses roam, thanks to management support from the Netherlands. Again, the manager did not like us to go outside the paths. Nevertheless, we took a look at a dead mare in the field. The cause of death was horrifying, she had died during the birth. This will probably happen more, but it does give a dilemma when it comes to man-bred and held animals. Clearly, it shows that the New Wilderness hype has its raw sides that what happens is not  so 'peaceful' according to human standards. But with a pair of rose coloured glasses one films better, especially if you occasionally turn around or turn off the camera. That is also appreciated more by the general public, that is clear! Investor Lex Harding can be satisfied.
Nature is gruesome"
Oostvaardersplassen from above by Drone
End of 2015
March 2018
The film "The New Wildernis" can be seen in Dutch at this link ( https://www.npo.nl/de-nieuwe-wildernis/25-12-2014/VARA_101372340 ) 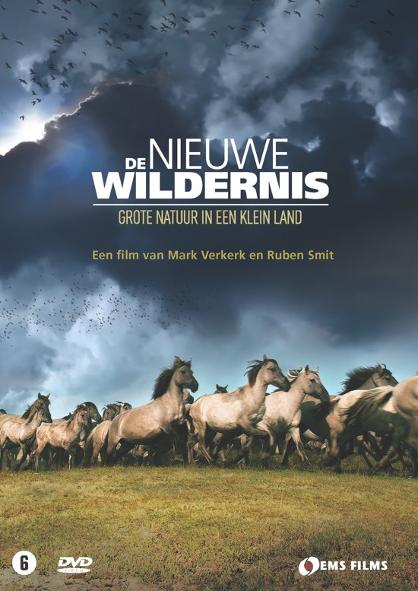 Back to Overview oostvaardersplassen