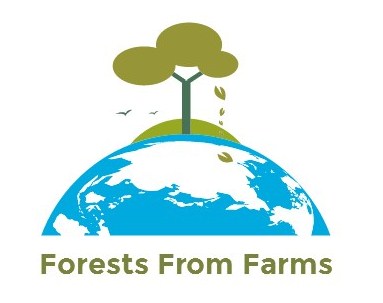 Who are we and why are we doing this?
We are a husband and wife team who have been concerned about the environment and animal protection for many years. Marit's professional background was as an architect/European Public Affairs lobbyist and Nigel's was as an engineer. In 2003 we left the Netherlands where we lived in a big city and moved to an old farm in France. We suddenly went from having a garden that measured about 75 square metres to having three and a half hectares of land: that's 35,000 square metres!
We saw this as an opportunity to compensate for our greenhouse gas emissions by planting trees. So one year we planted over 800 saplings. However an exceptionally dry summer followed by an exceptionally cold winter killed off most of them. As you can imagine that was rather a disheartening experience, so we put that idea on hold for a while and concentrated on renovating our house. 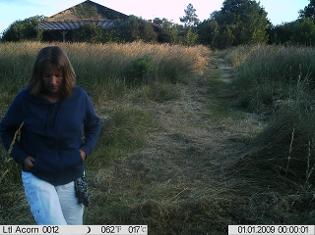 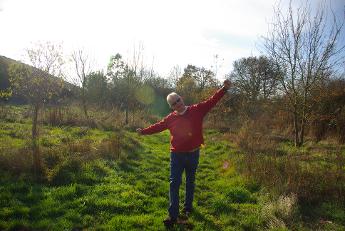 2009, still mainly grassland
2016, young and mature trees
We couldn't leave the land unattended to grow completely wild as there were too many weeds that would take over completely and invade the neighbouring fields. However, we didn't want to use chemical weed killers and we wanted to leave the land as undisturbed as possible. The solution was rather than killing the weeds, just to stop them from reproducing. This was achieved by cutting them back as they came into flower and repeating as necessary. This took a couple of years to have a really noticeable effect as some of the plants produce seeds that lie dormant for more than one year.
Another result of this targeted cutting back, rather than cutting everything down, was that more and more trees and shrubs started to grow naturally. Although some grew in the middle of open spaces, many more were spreading out from the hedges that surrounded and crossed our land. When we saw this and compared it to our abortive effort to plant trees we realised that the trees that survived grew where they were sheltered by existing trees.
Another advantage of our minimum disturbance policy has been the dramatic increase in wildlife: butterflies, grasshoppers, beetles, praying mantises, deer etc. It is amazing to see the contrast compared to the cultivated fields next door.
Thanks to having so much land, we are able to compensate for our own emissions and our immediate family members' as well. However, this is not possible for people who live in towns. That is why we decided to create Forests From Farms: not only does this give everybody a chance to offset their greenhouse gas emissions, but if they want to, they will also be able to visit the areas that we are replanting and watch them grow over the years and see how the wildlife returns.
To see how our farm converted into a forest over the years please click the link below
From farmland to forest