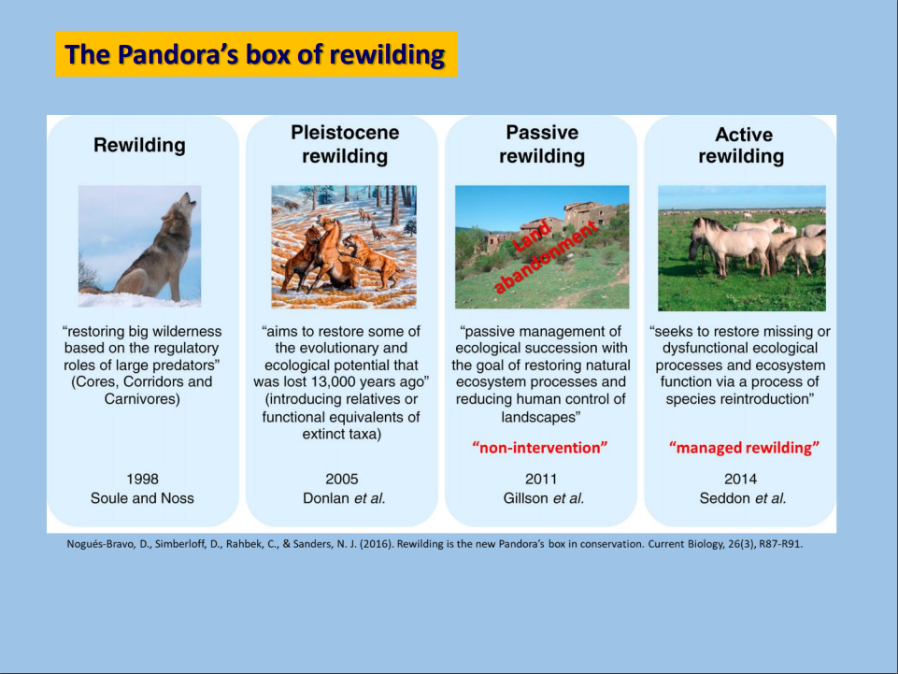 Maar nu eerst: The OVP a "Zombie Idea About Ecology" by Mark Fisher

In terms though of a more focussed riposte, I deem nature development as exemplified by the ecological disaster that is the Oostvaardersplassen as being a true zombie idea. Nature development is a peculiarly Dutch concept about creating new nature (30). The concept may have had its origins in the early 1970’s, when grazing was increasingly practised in nature reserves (31). Like conservation grazing in Britain, the main emphasis was botanical management with herbivores acting as lawn mowers. A new emphasis evolved from the mid-70s to the early 1980’s when nature conservationists in the Netherlands saw the opportunity to create what they alleged would be more diverse woodlands, through experiments on forest grazing of stands of Scots pine by Scottish Highland cattle in a complex of nature reserves at the southern fringe of the Veluwe, a forest-rich ridge of hills. The thinking was that the large herbivores would play a significant role as a tool in the management of the area, but were increasingly being touted instead as part of the ecosystem (32). It appears that Dutch ecologist Harm van de Veen was instrumental in pushing this, based on his experiences in N. America (33, 34). van de Veen gives one of the clearer explanations for the use of a nature development approach when he wrote a critique in 1989 of the nascent Oostvaardersplassen (35):
“Do we want to maximize the reproduction success of a number of desired species or dare we also look at nature in terms of natural rules that determine the number of copies of which species by means of adaptation and natural selection will be present. Or put differently: do we replace livestock farming by godwit or geese cultivation or dare we, in areas that are suitable for this, to provide the necessary policy space to the natural processes that belong there with uncertain outcomes?”

He didn’t think that the Oostvaardersplassen, famed after its reclamation from the sea for its greylag goose population (36) then later for the cattle and horses introduced there, was much of a demonstration of nature development. He concluded that since the Management Committee had opted solely for water management, instead of setting goals within which there was room for fundamental natural processes, then it was  hardly surprising that the Oostvaardersplassen Development Vision was actually a "bird conservation vision". The issue for him was that it is was not indicated which species would and which species would not belong there, when he could foresee that a habitat like the Oostvaardersplassen had many missing mammals, such as wild boar, otter, badger and the other, smaller carnivorous mustelids (such as weasel, polecat, pine marten, stone marten). He also believed that the lynx and wolf should be there, but he noted that while the spontaneous migration in and establishment of otter, pine and stone marten, and badger were likely, the other missing mammals had been “reasonably ruled out for many decades”. It is likely that he was particularly referring to the large carnivores, since he had been rebuffed before about reinstatement of wolves in his experimental areas, and it had always been his aim for self-regulation within the fauna community, as well as a dynamic interaction between fauna and vegetation (34,35). In this, van de Veen obviously realised the importance of building trophic occupancy and structure at all levels.

Don’t trust your intuitions without doing the math

It is a sad misfortune that Harm van de Veen died in 1991 at the age of 45 (33). He would likely have been a strong advocate in keeping nature development away from its disastrous course of trophic imbalance through solely dumping herbivores into fenced landscapes, a policy that is of course wedded to the one-eyed fanaticism of Frans Vera as the architect of the approach at the Oostvaardersplassen (37). The Oostvaardersplassen thus became increasingly the emblematic area of Dutch nature development (38) with Vera advocating that it be turned into a national policy (39). In unravelling the cant at the Oostvaardersplassen, I inadvertently followed another of Fox’s “zombie-fighting lessons”, this one being “Don’t trust your intuitions without doing the math” (8). My intuition told me, on seeing evidence of the overgrazed and degraded landscape, and the many emaciated corpses of horses, deer and cattle, that something was very wrong at the Oostvaardersplassen (40,41). I initially calculated mortality from the difference between yearly counts of births of the herbivores, set against a mostly unchanging total population density, and found that the total deaths from starvation between 2005-2013 was around 8,000, or twice the total population (23, 40). I recalculated from a later graph of winter animal deaths, finding a similar number of 8,000 between the years 2011-2016 (42) with 1 in 3 animals having died in the winter of 2015-2016 (41, 43). It was enough for me to declare that the Oostvaardersplassen is the closest we have in Europe to a demonstration of an ecological meltdown from unrestrained herbivory, that conclusion being reinforced by a rough calculation which showed that the total herbivore numbers present at the Oostvaardersplassen in the Netherlands is four times greater than the herbivore density that is the threshold for woodland regeneration (44). This is a level of herbivore pressure at its food-limited carrying capacity, and which most evidently damages ecosystems (44). Two recent pieces of evidence support this. Steve Carver, by way of Twitter (45) took a pop at Guardian/Observer journalist Patrick Barkham for a facile article in which Barkham regurgitated the usual untrue rubbish about the Oostvaardersplassen (46):
“Since the 1980s Vera has introduced wild cattle, horses and red deer to 4,000 hectares of rewilded marshland at Oostvaardersplassen nature reserve, and proven that “natural” grazing creates a more dynamic landscape, a constantly changing mosaic of open glades and wooded groves”

Steve noted that Barkham was patently wrong, as there are no glades or wooded groves at the Oostvaardersplassen, and wondered if Barkham had ever been there. Barkham tritely replied that Vera's theories were certainly borne out at Knepp (more later) but Steve asked again whether Barkham had ever been to the Oostvaardersplassen, and presented a time-tour using Google Earth's historical imagery that showed the complete loss of shrubs and trees from two sample locations between 2004-2015, except for where there were small areas of fencing that excluded the herbivores (45). As Steve said, it’s a sobering comparison. The other piece of evidence is that supplemental feeding was carried out this month to stave off the intensity of winter starvation that happens at the Oostvaardersplassen because of the herbivores being at food-limited carrying capacity, as was also carried out in 2010 (47,48). However, the repulsion about the deaths at the Oostvaardersplassen has massively increased since 2010, and so another reason for the feeding this month was to prevent social unrest.

Well, that hasn’t worked: a week after the supposed supplemental feeding started, Dutch MEP Annie Schreijer-Pierik tabled a Parliamentary question to the European Parliament on the starvation of large grazing animals in the Natura 2000 area Oostvaardersplassen (49). She noted that between December 2017 and February 2018, “at least 1,755 large grazing animals died a cruel death from starvation in the Oostvaardersplassen”. She identified that the “persistent starvation” was caused by an excessively large population of animals being fenced in, and attributed the habitat destruction to that. Her questions were whether the Commission was aware of the adverse impact of the current policy, would it intervene, and wasn’t it a contravention of the EU’s animal welfare and nature management principles. It should be remembered that this ecological devastation is still carrying on after there has been two international commissions reporting in 2006 and 2010 that were constituted specifically to deal with the issues that Annie Schreijer-Pierik is raising yet again (24,40). Then two weeks after that, Dutch animal welfare activist Norma Miedema posted a video of herself and colleagues throwing hay over a fence at the Oostvaardersplassen, and with the Heck cattle rushing to eat it (50). During a second video of feeding elsewhere on the boundary fence, you can hear her say “killing fields” on the sound track and the camera zooms in to a notice posted on the fence that says “Oostvaardersplassen killing fields” (51). In both videos you can see the devastating degradation of the landscape within the Oostvaardersplassen from overgrazing. The responsibility for all this rests on the monumental ego of Frans Vera. If he had genuinely been interested in maintaining the water birds at the Oostvaardersplassen, then all it needed was some seasonal conservation grazing to manage for grassland, but instead we got his ecologically illiterate experiment in nature development that has resulted in what must be well over 10,000 deaths. Given all the foregoing, then nature development as demonstrated by the Oostvaardersplassen is definitely a zombie idea in ecology, although the trophic imbalance and its consequences pretty much bars it from being recognised as ecology.

Wild experiments at the Oostvaardersplassen: rethinking environmentalism in the Anthropocene

This paper draws together recent literatures on the geography of experiments and the potential of experimental modes of conducting science and politics. It examines their implications for environmentalism in the Anthropocene. We differentiate between two different conceptions of an experiment, contrasting the singular, modern scientific understanding of an experiment with recent appeals for deliberative public experiments. Developing the concept of wild experiments we identify three axes for critical enquiry. These relate to the status of the nonhuman world as found or made, the importance afforded order and surprise in the conduct of any experiment and the degree and means by which publics are included in decisionmaking. We then illustrate the potential of this framework through a case study investigation of nature conservation, critically examining efforts to rewild and de‐domesticate a polder landscape and its nonhuman inhabitants at the Oostvaardersplassen in the Netherlands. This is a flagship example of the wider enthusiasm for rewilding in nature conservation. In conclusion we reflect on wider significance and potential of these wild experiments for rethinking environmentalism in the Anthropocene.

https://onlinelibrary.wiley.com/doi/full/10.1111/tran.12030
Gebruikte documenten:
Experiments with the wild at the Oostvaardersplassen 2014
Falende Grazers 2013